Susan Barron was born and grew up north of Chicago. She received childhood training in music; graduated from the University of Illinois (Urbana) in pre-medicine; completed advanced degrees in clin-ical diagnostic chemistry; resumed musical studies and was seren-dipitously introduced to visual arts by photographer Art Sinsabaugh; lived and photographed in Europe for four years before relocating to New York City in 1974; worked in the field of clinical chemistry until 1994 in order not to compromise art work; now devoting all time to art, making collages, drawings, etchings and other ink prints, as well as photographs. Despite its medieval tendencies, Barron’s work is listed in both editions (1993 & 2000) of A Dictionary of the Avant-Gardes.

Barron's work is included in the permanent collections of the following museums: The Metropolitan Museum of Art; Phila-elphia Museum of Art; Victoria & Albert Mu-seum; Museum of Modern Art; The Fitz-william Museum; The Jewish Museum; The Getty Center & Museum; Altes Museum of Berlin; Detroit Institute of Art; The Israel Mu-seum and Rijksmuseum Meermanno–West-reenianum. Her work has also been acquired by rare book repositories at the New York Public Library; The Rosenwald Collection at The Library of Congress; The Newberry Library of Chicago; The Royal Library of the Nether-lands; Bibliothèque Nationale of France; Prin-ceton University Library and The Pierpont Morgan Library, as well as countless university rare book libraries around the world. Private collectors include Mr. & Mrs. Paul Mellon and Ruth & Marvin Sackner in the U. S., and André Jammes in Paris.

Solo exhibitions have been presented in New York, Chicago, St. Louis, Philadel-phia, Wilmington, Northampton, London, Cologne and Paris. Group exhibitions include the Metropolitan Museum of Art, Phila-delphia Museum of Art, The Israel Museum, The Whitney Museum of American Art, New Britain Museum of Art, The Dual Muse, Washington University Art Museum (St. Louis), and The Next Word at the Newberger Museum. Portfolios have been published in Camera, Creative Camera, and Aperture. A Dreyfuss Fellowship recipient at The MacDowell Colony, Barron also received a year-long artist-in-residence fellowship in Israel. She received Artist’s Grants from the New York State Council on the Arts (Photography), The Polaroid Corporation, and the National Endowment for the Arts (Works on Paper).

A monograph entitled ANOTHER SONG was published in 1981.  The limited-edition, hand-made volume contains forty original photographs tipped into an elegant binding. The work inspired a poem by John Cage, which was written especially for this sequence of pictures. The book was shown at The Metropolitan Museum of Art and twice at both the Philadelphia Museum of Art and The Israel Museum. It was also featured in the Art Journal’s ‘Artists and Writers: Collaborations of the 20th Century’. Complete wall exhibitions of ANOTHER SONG have taken place at the University of Illinois Krannert Art Museum, University of Iowa Museum of Art, Drexel University, The Southeast Museum of Photography, St. Louis Center for Contemporary Arts, Smith College, and Printworks Gallery, Chicago, which was her first non-museum show in eighteen years.

LABYRINTH OF TIME, her fifth book, was completed after a nine-year evolu-tion. The eleven, full leather bound, conven-tional–looking volumes contain seventy-seven works-on-paper that open up and unfold to one hundred and fifty-two feet during exhibi-tion. Specially designed cases with fiber-optic lighting display each outstretched volume. All her books contain the originals, not printed re-productions, allowing the viewer to maintain an authentic encounter during the course of reading. The manuscript premiered as a solo exhibition at the Newberry Library of Chica-go, traveling on to the Philadelphia Museum of Art and London’s Victoria & Albert Muse-um. LABYRINTH OF TIME has been met with an enthusiastic critical response in all ven-ues. An academic tour is being planned.

Other major works include TWISTING SILENCE, MIRROR (her poem trans-cribed into Braille), and JAMAICA MISTAKE (seven drawings with seven poems embedded in the officially recognized urtext of Creation’s seven days), SENZA ANCORA and EXPE. CASTING MEMORY (a girdle book) is scrib-ed onto windowpane vellum in a variant of 6th C. Insular scrip. The binding is made out of the artist’s own hip bone. She is currently work-ing on a deck of cards and a classic Roman alphabet. Barron works from a studio in Brooklyn. To arrange an appointment to view original works, refer to the contact page.

An artist’s archive has been established at the Newberry Library of Chicago. 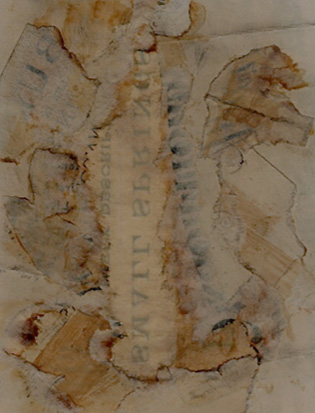